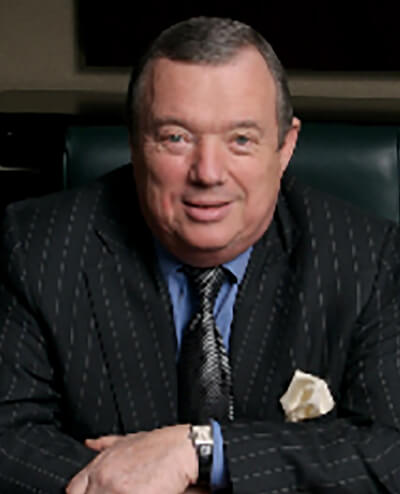 Jean-François Rossignol is co-founder and Chief Scientific Officer at Romark Laboratories in Tampa as well as a professor of Medicine and Infectious Disease at the University of South Florida (USF). Born in France, Rossignol is a scientist, medical chemist, and physician who developed groundbreaking treatments for parasitic diseases and, in 1974, discovered a new class of broad spectrum antiviral drugs. After completing his medical training, he worked for the Division of Parasitic Diseases at the World Health Organization. Subsequently, he pursued a career in academia and pharmaceuticals, discovering and developing drugs such as halofantrine for the treatment of resistant falciparum malaria as well as albendazole and nitazoxanide to treat intestinal protozoan and helminthic infections. Later, while working at Stanford University, he uncovered nitazoxanide’s antiviral activity against the hepatitis C virus (HCV). Additionally, nitazoxanide, was the first treatment for cryptosporidial diarrhea and viral gastroenteritis, caused by norovirus and rotavirus, found safe enough to be given to infants. This led to the development of a new class of antiviral drugs known as thiazolides that stimulate immune cells, activating gene pathways that block viral transformation. Romark Labs have initiated the synthesis of second generation thiazolides and established new derivatives that are now entering clinical development in the treatment of rotavirus and norovirus, influenza and influenza like illnesses as well as chronic HBV and HCV. Rossignol holds 41 U.S. patents and is a fellow of the College of Physicians of Philadelphia. In 2016, he received an honorary MD from the University of South Florida.

Q    Of your patents/inventions, which one is your favorite and why?

According to the Merck Index, which is listing more than 20,000 chemicals, drugs and biologicals used mostly in medicine, a drug inventor could be the chemist who synthesized the molecule, the pharmacologist who first discovered the activity of the new compound in vitro and in vivo and finally the physician who first gave the drug to human subjects showing its efficacy. While I was one of the three in the three drugs today on the market, the discovery of nitazoxanide, listed me in the three categories, the chemist who synthesized the drug, the microbiologist who discover the activity of the drug against bacteria and parasites and the clinician who first gave the drug to human subjects. Later I also discovered that the drug was antiviral with a broad range of antiviral activity and its mechanism of action in targeting cell energy metabolism by modulating mitochondrial activity of the cells. The results of this research were the subject of 30 United States Patents, 27 were awarded a three are still pending.

Upon the completion of my undergraduate degree in chemistry at La Sorbonne of the University of Paris, I joined the Radium Institute to undertake my graduate education in the Department of Medicinal Chemistry of the Institute toward my doctorate degree in chemistry. Created in 1909 for Marie Curie, the Radium Institute was the Division of Radiobiology and Cancer Research of the Pasteur Institute in Paris. The Institute was located in the heart of the Latin Quarter surrounded by the majority of the most prestigious scientific institutions in France where significant discoveries were made over the last two centuries such as the Ecole Normale Supérieure where Pasteur worked for many years discovering among other things the rabies vaccine, the College de France, the Ecole Polytechnique and many more. At the Radium Institute in 1965 the shadow of Marie Curie was still with us along with those of her husband, Pierre, her daughter Irene and her husband, Frederic Joliot, who all won four Nobel Prizes between 1903 and 1935 for their research on radioactivity. There was also the Curie Foundation, today the Curie Institute, which was a part of the Radium Institute and a leading cancer hospital in France. The proximity of the hospital and my contacts with the physicians working there were directly responsible for my decision to study medicine and to become a physician. The Department of Medicinal Chemistry at the Radium Institute was the continuation of the eponym department at the Pasteur Institute where before WWII, the first antimicrobial sulfonamides were co-discovered with the Germans by Ernest Fourneau and his team of chemists and the pharmacologist Daniel Bovet who later received the Nobel Prize in 1957. Finally, in 1965 Jacques Monod, André Lwoff and François Jacob won the Nobel Prize for Medicine for their discoveries concerning genetic control of enzyme and virus synthesis. Surrounded by so many discoverers the new generation had to discover and some of us did. For me as a medicinal chemist and a physician it would be in the treatment of infectious diseases mainly in tropical countries and cancer.

Q   Do you have a personal process that you follow when inventing?

Drug discovery is a very risky, challenging, yet intellectually rewarding business. The Tufts Center for the Study of Drug Development at Tufts University in Medford, Massachusetts recently showed that it takes the testing of an average of 10,000 chemical compounds to identify 250 (2.5%) with a good activity in preclinical studies. Only 5 (2%) of these 250 molecules will be tested in clinical trials but only one will eventually be approved and commercialized, which means 1 compound out of 10,000 chemical products originally screened. The screening of a large number of chemical compounds was requiring a large organization such as those in Germany before WWII working under Paul Ehrlich and later under Gehrard Domagk both at Elberfeld, which would ultimately lead to the discovery of Salvarsan® and Prontosil® respectively both considered the birth of chemotherapy. The Radium Institute and myself in particular had to find a way to discover an active molecule without synthesizing 10,000 compounds, which would have taken me more time than my entire life! I had to follow a different way to discover active molecules. We were only ten chemists in my laboratory, and we were two medicinal chemists. I had to look around on the St Genevieve Hill to see what my illustrious predecessors have done, and I came across the work of the famous chemist Marcellin Berthelot who worked next to the Institute at the College de France in Paris (1827-1907). Berthelot concentrated his research in studying the importance of composition and connectivity in chemistry assembling molecules from simpler type to reach relatively simple final compositions. It was the application of an old concept to a new application in medicinal chemistry, which lead to the discovery of nitazoxanide, which only required the synthesis of 27 molecules. Making nitazoxanide was the simple combination of aspirin chloride and a single heterocyclic ring and the resulting compound was a new molecule modulating mithocondrial activity in human cells regulating energy metabolism in the entire body. The new drug was targeting the cells infected by a pathogen, mainly a parasite or a virus, or more generally cancer cells, all of them requiring additional energy in order to survive. Therefore, reducing the energy in the cells on a physiologically accepted manner was a new way to block the replication of many pathogens and consequently to treat viral infections such as the new emerging coronavirus SARS-Cov-2 causing Covid-19.