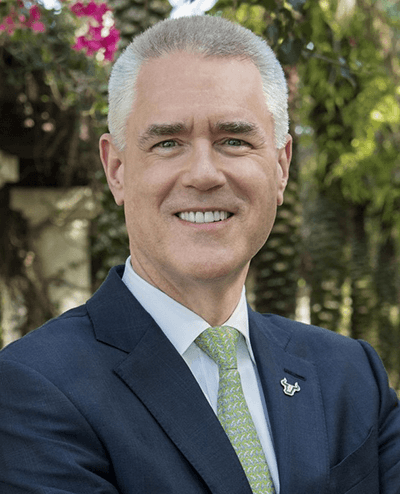 Steven C. Currall became the seventh president of the University of South Florida on July 1, 2019. He also is a tenured professor at USF. Dr. Currall joins USF from Southern Methodist University in Dallas, Texas, where he served as provost and vice president for academic affairs from 2016 to 2019. While working at Rice University in Houston, Texas, he founded the Rice Alliance for Technology and Entrepreneurship, which assisted in the launch of more than 160 new technology start-up companies. Those firms raised in excess of $300 million in equity capital. He has conducted research and taught for three decades on organizational psychology topics such as innovation, emerging technologies, negotiation and corporate governance. Dr. Currall was also lead author of a book on university-business-government collaboration entitled, Organized Innovation: A Blueprint for Renewing America’s Prosperity (Oxford University Press). The book, which is based on a study funded by the NSF, was the culmination of a 10-year research project on interdisciplinary research involving science, engineering and medicine. Dr. Currall is a Fellow of the American Association for the Advancement of Science.